An Introduction to The Collected Works of Paul Laurence Dunbar

Today, American culture contains whispers of Paul Laurence Dunbar’s work with little recognition of the man himself. For instance, for the title of her acclaimed memoir, Maya Angelou used the line “I know why the caged bird sings” from Dunbar’s poem “Sympathy.” She credits Dunbar for this phrase, but still, Americans typically associate this line with her memoir rather than with the original poem by Dunbar. Across the US, high schools don the name of “Paul Laurence Dunbar,” yet the typical high schooler will graduate without studying Dunbar’s work. Contemporary scholars of Dunbar’s work such as Joanne Braxton, Hank Lazer, and Harryette Mullen, who presented at the Dunbar Conference Stanford in 2006, remember their grandparents and parents reciting Dunbar at church and family celebrations. They also explain how older generations studied his works in traditionally all-black schools. These scholars work to bring Dunbar back into the central discourse of the American literary canon. 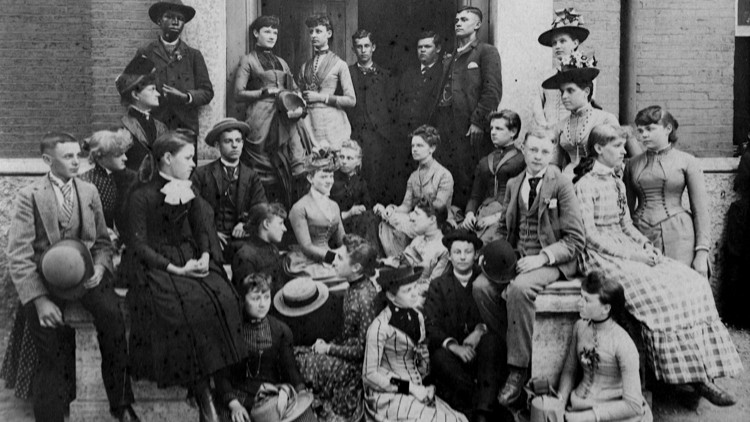 In his short life, dying at age 34, Dunbar produced a remarkable well of poetry, prose, and short stories. He published a dozen volumes of poetry, four compilations of short stories, four novels, and a play. On top of these literary achievements, he composed music of his own.

Only a generation removed from the Civil War and emancipation, Dunbar’s poetry looks critically at the history which freed his parents from the bonds of slavery and ensured his life as a free man. For instance, many of Dunbar’s poetry represents the complex and troubled reality faced by African American soldiers during the Civil War as they fought for a country that once owned their life and body through slavery. Take the following passage from “The Colored Soldiers:”

For the lifeblood of the prey,

Sprung they forth and bore them bravely

In the thickest of the fray.

And where’er the fight was hottest,

Where the bullets fastest fell,

There they pressed unblanched and fearless

At the very mouth of hell.

One glaring tension within Dunbar’s language here lies in the celebratory praise the soldiers for the bravery while connecting them to animals, “hounds.” Furthermore, “unleashed” suggests an owner freeing these once captive creatures. This foreshadows an unsettling future. After years of enslavement, the first sign of freedom arrives on the violent battle ground, “at the very mouth of hell.” Considering Joshua Dunbar’s role in the civil war, this poem offers readers a glimpse into Dunbar’s intimate proximity and complex relationship to the war. 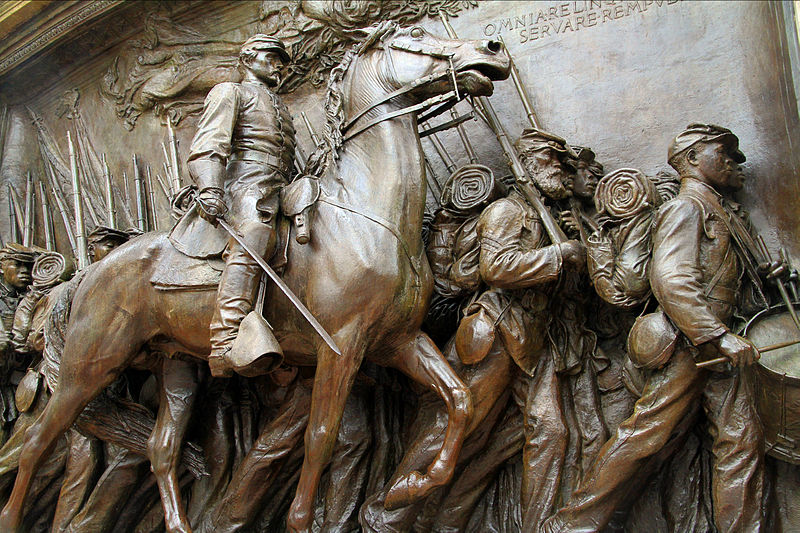 Dunbar wrote during the popularity of the “plantation tradition” in which authors, such as Thomas Nelson Page and Joel Chandler Harris, romanticized life on plantations, portraying it as a place of peaceful coexistence between slaves and owners.

acts were performed by whites in blackface and mocked African Americans by portraying racist caricatures for comedic effect. Dunbar’s poetry reflects his awareness of this misrepresentation, and with subtlety and nuance, his work counters the racism minstrelsy perpetuated.

The most well-read of Dunbar’s poetry, such as “Sympathy” and “We Wear the Mask,” are examples of Dunbar’s standard English verse. These poems assumed a conventional form and syntax. On the other hand, his dialect poems take on a vernacular associated with southern blacks during the time of slavery.  Unlike white plantation narratives, Dunbar’s dialect poetry highlight the daily existence, beauty and pain, of African Americans rather than idealizing the lives of hardworking slaves. Doing this, he speaks with a double consciousness, being simultaneously aware of the prejudiced perceptions of others while maintaining sight of one’s ideal self. Double consciousness is, simplified, a firsthand or inherited knowledge of oppression and historical trauma but a faith in one’s own claim to the responsibilities, benefits, and attitudes of freedom. In this way, double consciousness looks toward the troubled past, but looks, too, forward. With double consciousness, comes the double voicing (or Signifyin[g], speaking both using the voice of and speaking back at a negative idea of blackness) of Dunbar’s dialect poetry. These are most apparent in a poem like “When Malindy Sings” (frequently performed), especially in lines “You [Miss Lucy] ain’t got de tu’ns an’ twistin’s.” This line could mean that Miss Lucy’s life has not included enough hardship, in the form of twists and turns, for her to have a sense of melody--making it a recognition of shared trauma, giving precedence to the pain before the artistry. This line could equally refer to Miss Lucy’s lack of musical aptitude, making it, instead, a celebration of Malindy before anything else. The first reading indirectly satisfies the “looking back” and the second reading satisfies the “looking forward.” This occurs just as powerfully at other points through the poem, such as the line “blessed soul, [Malindy], tek up de cross.” In this one, the cross as a symbol of pain and torture is a reading that looks back, and the cross as a symbol of salvation is a reading that looks forward.

Not all readers of Dunbar are so enthusiastic about his usage of a commonly parodied voice (minstrelsy circulating at the time), viewing his dialect poetry not as a refusal-by-imitation of the stereotype. They instead think its imitation strengthens the stereotype, whether or not it counters with commentary. Ralph Ellison, intellectual and author of the Invisible Man working about 50 years after Dunbar’s death, criticized Dunbar for engaging with white stereotypes of African Americans. James Weldon Johnson, in his introduction to The Book of American Negro Poetry, condemned Dunbar for bringing outdated views back into the popular discourse.  However a reader falls on this argument (whether Dunbar’s using of Signifying is a reclaiming or a forfeiting of power) depends on how they come to resolve the tension between reproducing and signifying on a stereotype or racist caricature. A reader who positively resolves the tension will think of Dunbar’s dialect poetry as flourishing studies of complicated and self-contradictory, but irrefutably human, subjects. A reader who negatively resolves the tension will think of Dunbar’s dialect poetry as a revival of empty and painful caricatures.

The Complete Poems of Paul Laurence Dunbar was originally published in 1913, by Dodd, Mead and Company. Prior to Joanne Braxton’s updated and edited collection of Dunbar’s work, this 1913 edition was the largest collection of Dunbar’s poetry to date, yet it was missing many of his poems which were published in magazines and periodicals. As a child, Braxton’s parents would recite Dunbar’s poetry in the home, an experience which influenced her pursuit for a more expansive and critical collection of Dunbar’s poetry. In her studies on Dunbar, Braxton was disappointed by the 1913 ‘Complete Poems’ collection and hoped to publish a comprehensive edition to use in her classrooms. These “Added Poems” were collected from various magazines and periodicals, mostly found at the Ohio Historical Society in Columbus.  In her introduction, she writes that Dunbar was “rightly uncomfortable with the approval he garnered from mainstream white critics, because he knew they were deaf to his voice of protest” (xxx). In The Collected Poetry of Paul Laurence Dunbar (1993), Braxton presents the reader with “the man we know as Paul Laurence Dunbar and the man whom perhaps nobody knew,”, and in doing so, she provides the modern reader with a more celebrative and nuanced collection of Dunbar’s work (xxxii).

For over a century, Dunbar’s work has influenced black American culture. Religious communities and families like Braxton’s have recited Dunbar poetry at celebrations, gatherings, or simply in the home, for generations. Critically, Dunbar has been discussed in many literary fields. Critic Marcellus Blount celebrates Dunbar’s achievements as central to the progress of African American literature:  “Dunbar's vernacular performance illustrates the solid ground of African American poetic traditions” (584). Beyond the world of academia, the National Park Service runs the Dunbar House in Dayton, Ohio offering tours of the renovated house which Dunbar lived in his last years of his life with his mother from 1904 to 1906.  The legacy of Paul Laurence Dunbar is expansive and ever important, especially in our modern day struggles with race and inequality. We hope you find the resources here, featuring poetry from The Collected Works of Paul Laurence Dunbar, helpful in your own exploration and discovery of his work. 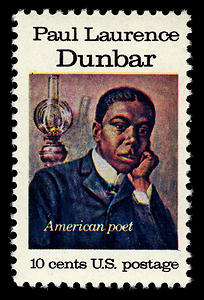 Dunbar featured on US Postage. image courtesy of wikimedia commons.

“‘All Coons Look a Like to Me’ Sheet Music.” National Museum of American History, americanhistory.si.edu/collections/search/object/nmah_663819.