A Brief Introduction to Toni Morrison's The Bluest Eye

Toni Morrison’s first novel, The Bluest Eye, embodies a unique position in the American literary imagination: set in 1941 and published in 1970, the novel contends with two historical narratives while bearing witness to one and inhabiting the other. Morrison establishes a narrative that concerns not only people’s Blackness but the lives of Black people. Morrison focuses particularly on  the self-identity of two young Black girls, Claudia MacTeer and Pecola Breedlove. In the foreword, she states that “Beauty was not simply something to behold; it was something one could do,” opening a conversation about beauty that echoes through the novel (Morrison xi). For women, Morrison “speaks to the lives of very young women, so crippled in their desires that they all appear to be victims.” (Wagner-Martin 9) And, perhaps most importantly, Morrison speaks to the reality of Black family lives and  the pain of coping with racial divisiveness within Lorain, Ohio. This racial divisiveness is perhaps best articulated in the idealized white beauty standards, represented through colorist attitudes and white celebrity figures like Shirley Temple, that permeate Pecola’s milieu.

US American media, geared a white audience, and the people who consume and enforce its values are largely responsible for the internalized self-loathing of Pecola Breedlove. Yet, Pecola’s socialization and introduction to the idealization of white beauty starts with her mother, Pauline Breedlove, and her love for film:

“along with the idea of romantic love, [Pauline] was introduced to another—physical beauty. . .It was really a simple pleasure, but she learned all there was to love and all there was to hate” (Morrison 122-123). The transference of these values of the “white American culture” from mother to daughter become detrimental to Pecola’s self-conception. These same values are represented in Pecola’s life in her fixation on Shirley Temple: while in the MacTeer’s care, Pecola drinks all of their milk so that she can use a cup with Temple’s face on the side (Morrison 23). The Breedloves, in contrast, believe in this racialized ugliness and even enforce this notion upon themselves:

The master had said, ‘You are ugly people.’ They had looked about themselves and saw nothing to contradict the statement; saw, in fact, support for it leaning at them from every billboard, every movie, every glance. ‘Yes,’ they had said. ‘You are right.’ And they took the ugliness in their hands, threw it as a mantle over them, and went about the world with it. (Morrison 39)

Here, Morrison illustrates the process by which the Breedloves came to understand themselves in their supposed ugliness, which juxtaposes the way Claudia interprets the MacTeers: with “love, thick and dark as Alaga syrup” in the very foundations of their house (Morrison 12).

Claudia, the youngest MacTeer daughter, serves as the novel’s mouthpiece and witness to an entire history. And the history that Claudia addresses, not that of a nation on the brink of war but that of Pecola Breedlove, on the brink of madness, speaks to the idea of people put “outdoors” by both a racist history and society.  In recognizing Pecola as “outdoors,” Claudia, considers Pecola’s situation: 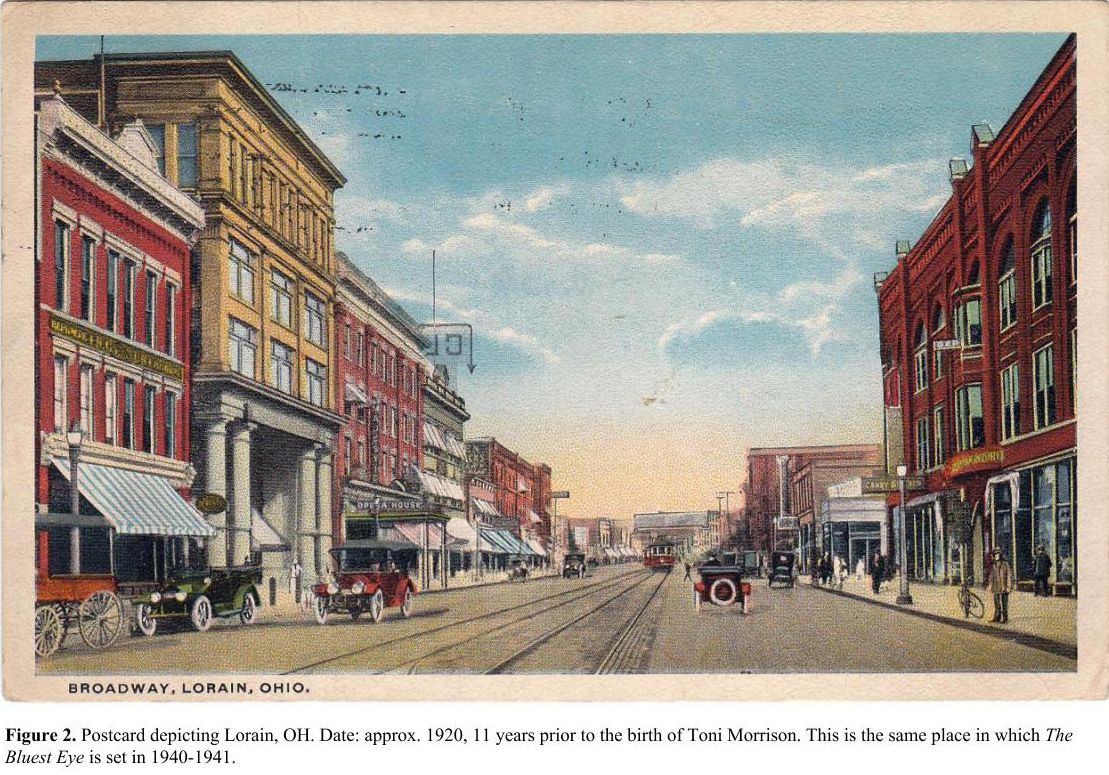 Outdoors, we knew, was the real terror of life…There is a difference between being put out and being put outdoors. If you are put out, you go somewhere else; if you are outdoors, there is no place to go. The distinction was subtle but final. Outdoors was the end of something, an irrevocable, physical fact, defining and complementing our metaphysical condition. (Morrison 17)

In seeing Pecola as outdoors, Claudia demonstrates an acute understanding of both race and class that belies her young age while also giving us insight into her own family structure, which stands in stark contrast to Pecola’s.

Morrison reassures us that she does not suppose to explain the history (the why) of the Breedloves but rather to construct it (the how), piece by piece until a life’s narrative unfolds (Morrison 6). Claudia, by witnessing Pecola, builds a life; she beholds Pecola at first as an equal, a child, and later, as an emptiness, because having been put truly outdoors with nowhere to go physically or mentally, Pecola becomes the nothing that she was regarded as all along—or at least tries to become that nothing (Morrison 45). In her attempts to understand Pecola, Claudia must recognize her with her own eyes and through her own experience because “to look with eyes other than one's own is to falsify both self and world” (Fick 12). Claudia establishes herself as a purveyor of reality in a novel that contends with a girl’s falsity by seeing with her own eyes. Here, Fick highlights the central conflict in Morrison’s novel, not the pervading incestuous rape and pregnancy, but rather the idea of sight as one’s own—something belonging to a person or group of persons. While we understand Claudia’s gaze as one tinged by an age of innocence, we also see her as a foil to Pecola’s own desire for blue eyes.

Claudia MacTeer sees Pecola as a girl slightly older than herself who admires Shirley Temple for all the reasons that Claudia hates her, as someone who can bleed and birth, and as someone who asks openly, and perhaps boldly, about how to get someone to love you (Morrison 32). She, who can interpret and contextualize her own identity, chooses to do the same for Pecola. In “PECOLA BREEDLOVE: THE SACRIFICIAL ICONOCLAST IN THE BLUEST EYE” Ramona L. Hyman argues that Pecola represents a class of  Black children who choose to deliberately reinterpret their familial identities in order to align with white hegemony (Hyman 256). We see Claudia explicitly parsing Pecola’s identity, but merely catch glimpses of Pecola doing the same. And yet, Hyman regards her as an archetypal figure, representative of a common experience. Pecola parses her identity via the gaze of the other, whether Mr. Yacobowski, the racist purveyor of sweet Mary Janes, Soaphead Church, the town mystic who purports to give Pecola blue eyes, or Claudia, another little black girl, a figure Morrison herself characterizes as “the most helpless thing in the world”. But none of these figures can truly understand the emptiness that permeates Pecola’s being: she is not simply dreaming of another life, but imagining her way out of existence, and the loss of her child, forced upon her by her own father, Cholly, may merely be a way to complete the task, to excuse herself from this world and enter the next.

Claudia tells both hers and Pecola’s story, whereas Pecola is largely silent, with only a few pages of the novel focalized through her perspective. Pecola embodies “the predicament of those whose silence cannot signify or even be recognized as an agentive gesture, precisely because it is thought to be evidence of an incapacity for self-expression” (Christianse 5). In constructing Pecola’s history, Claudia gives legitimate voice to both her silence and reality, despite the vacuity that Pecola’s narrative otherwise inhabits. Claudia allows Pecola to be silent, and tells her story with space for that silence to exist and define Pecola. Claudia and Frieda are the only characters at the end of The Bluest Eye, when Pecola is carrying her father’s child, who “listened for the one who would say, ‘Poor little girl,’ or, ‘Poor baby,’ but there was only head-wagging where those words should have been” (190). The love that Claudia seems to develop for Pecola is demonstrated through her telling of the story more so than any act Claudia does for Pecola in the novel. Even in her retelling of Pecola’s story, Claudia knows that she did not love Pecola at the time of her rape, pregnancy, and madness: Looking back, Claudia says that “Oh, some of us ‘loved’ her” (206), acknowledging that the love they felt at the time was not a genuine one. However, in retrospectively telling Pecola’s story, Claudia is demonstrating her love and parsing their joint trauma, giving Pecola voice in spite of her silence .

Looking at Morrison’s books through the lens of trauma theory gives another layer of importance to the storyteller because speaking about a traumatic experience helps to combat the trauma. In this case, Claudia telling Pecola’s story combats the trauma of the events of her life by expressing Pecola’s pain and allowing it to be seen and acknowledged, and her telling addresses her own trauma from her proximity to Pecola’s pain. In Morrison’s novels, “characters continually vacillate between repressing and revisiting trauma in their attempts to verbalize and move beyond it” (Schreiber 10). Although Claudia’s storytelling is an act of love for Pecola, even this falls short. “There is no gift for the beloved. The lover alone possesses his gift of love. The loved one is shorn, neutralized, frozen in the glare of the lover’s inward eye” (Morrison 206). Morrison lets stand a paradox here: Claudia’s telling of Pecola’s story is an act of love, an acknowledgement of her trauma and her past, a way of saying that she was heard despite her silence. Yet at the same time the telling of her story is an act that Claudia can only do for herself, and an act that freezes Pecola in the glare of the storyteller’s inward eye.

Claudia’s act of storytelling is her ultimate way of doing beauty in the novel. And Morrison breathes life into every aspect of the telling: Morrison’s writing, descriptive and illuminating, can only be described as, in and of itself, beautiful. “She embraces them [her characters] in their beauty as well as their ugliness, in their possibilities for salvation—or at least for survival—as well as their limitations.” (Harris 325) Which leads to one of the heaviest burdens we must grapple with as readers: how do we handle every horrible action and circumstance when they’re presented so beautifully? The Bluest Eye demonstrates Morrison’s literary genius in that she creates sympathy around a character who raped his own daughter and ran away, but she keeps us captivated in her prose with her lyric landscape of beauty, pain, grief, and love.