The Leatherwood God: A Critical Introduction

In the “Editor’s Study” of May 1887, William Dean Howells wrote, “Let fiction cease to lie about life, let it portray men and women as they are, actuated by the motives and the passions in the measure we all know. [. . .] Let it speak the dialect, the language that most Americans know -- the language of unaffected people everywhere” (Alexander 46). Years later, Howells takes this project on in 1916’s The Leatherwood God. Documenting a historical event, in which an imposter comes to a camp meeting in Salesville, Ohio the novel brings dimension and complexity to the people living in a rural, Midwestern community much like the places Howells spent his childhood.

Born in 1837, Howells moved to a variety of towns in Ohio throughout his childhood. These towns included Hamilton, Dayton, as well as Eureka Mills — where the family lived in a log cabin (Goodman and Dawson, 9). This Midwestern rural culture did not value education, and Howells never had any formal education beyond “grammar and intermediate schools.” Instead of days in school, Howells spent long hours working for his father in his print shop. Howells recalled that he could set type before he could read (Goodman and Dawson 9).

His self-education catalyzed Howells’ curiosity, and he wanted more for himself than the farming and trade-oriented careers that surrounded him throughout his childhood. After his election as the clerk in the Ohio State House of Representatives, Howells worked for Ohio State Journal. 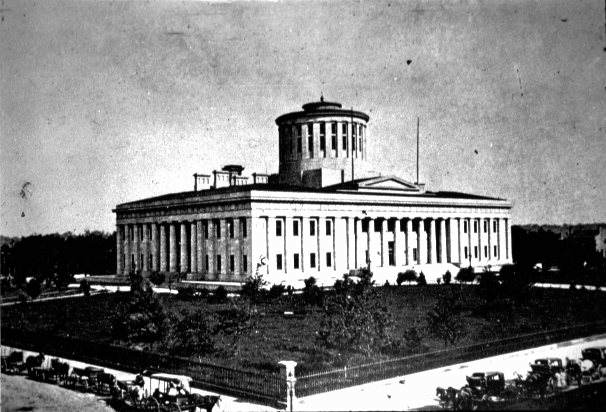 Figure One: The Ohio Statehouse, courtesy of Project Gutenberg

Here, he was acquainted with many of the most elite writers of his time. These included the older literary elite of Ralph Waldo Emerson and  Nathaniel Hawthorne, though his own realist work represented a departure from Hawthorne’s romanticism (Elinor, 475). Several years later, in 1865, Howells moved to Cambridge, Massachusetts — arguably the most intellectual location in the country during this time. In Cambridge, he was not only acquainted with Henry James and Samuel Clemens, but became close, personal friends with them (Goodman and Dawson, 107-108). He shaped both men's careers as an editor and critic throughout his career, including during his tenure as editor-in-chief of The Atlantic Monthly magazine. He did the same work with the poet Paul Laurence Dunbar and for the posthumous publication of Emily Dickinson's poetry.

In his fiction, Howells marshaled the two-fold forces of realism and humanism. Howells built a career out of depicting things as they were. He fervently denounced sentimentalism in writing or the manipulation of the events of a text in order to pull specific emotions out of readers. Howells showed the lives of his characters as accurately and truthfully as he could — his plots elevated ordinary lives, and he made everyday events resonant. Many of his plots are taken straight from historically recorded events. Matched with that style is an undeniable taste for humanism, which stressed the potential of human beings to solve their problems rationally and stripping the divine of its long-held importance.

In The Leatherwood God, Howells captures a community coping with a figure, Joseph C. Dylkes, who comes to this small town and claims to be the Messiah. Some people believe him, and some do not, causing strong divisions within the community.

Mark Twain, with whom Howells maintained an intimate literary relationship, spotted the promise of The Leatherwood God. In his review, he applauded Howells for accomplishing what many writers had failed to capture (Holstein).

"The psychology of the self-styled prophets who from time to time have succeeded in imposing on the credulity and half-understood desires of both the ignorant and the educated is a theme which, tempting though it might reasonably seem, has nevertheless had apparently very little attraction for novelists. Perhaps because of its inherent difficulties, perhaps because of the dangers of offense it contains, it has been used so very seldom that this new book by the dean of American letters can add novelty to its many other claims for attention" (New York Times).

The Leatherwood God explores the dangers of demagoguery and the necessity of justice and the law, in part because of its Ohio frontier setting. Dylkes suddenly appears to the people of Salesville at a camp meeting. At the meeting, devout participants are already overcome with religious fervor and emotion when Dylkes cries “Salvation!” and whinnies like a horse before proclaiming himself the Messiah. In these camp meetings, which spearheaded the Great Awakening in rural communities, religious conversions were common as were emotional outbursts; that is to say, camp meetings and the isolated terrain of the backwoods Ohio frontier bred the perfect environment for Dylkes to claim godhood and gain a following.

In The Leatherwood God, Howells transformed this strange anecdote into a story about community governance and its intersection with religion. The community of Leatherwood Creek splits into believers and non-believers after Dylkes’ arrival, and Howells approaches these divisions with his characteristic love and sympathy, instead of the condescension and judgment that might have been more appealing to his cosmopolitan friends.

We see this in his description of an ardent Dylkes follower. Dylkes promises to perform a miracle to establish his god-like qualities. As Howells describes a woman who provides the cloth that Dylkes says he needs for the miracle, the reader feels empathetic instead of scorn. The cloth was meant for her children’s winter clothing, but “she carried the bolt wrapped about with her shawl, bearing it tenderly in her arms, as if it were indeed her flesh and blood, her babe which she was going to lay upon an altar of sacrifice.” This empathetic description evokes sorrow as we imagine this imposter taking advantage of an impoverished community only scraping by on the frontier. Thereby, Howells is able to introduce a snobby urban literary elite class from Cambridge, Massachusetts and New York City to a more expansive brand of American literature that contains a breadth of experience, following the expansion of the American nation.

At the novel's conclusion, Dylkes is put on trial by Squire Braile, and it is agreed that it is not breaking the law to impersonate a god. Braile seems to represent what Howells considers a necessary part of the community — a rational skeptic. Braile represents the return to law and order for the town and also a sense of compassionate justice, as he does not punish Dylkes for his crimes. This resolution reinforces Twain's suggestions about the vulnerability of these types of communities and the dangers that con men like Dylkes represent to them.

But perhaps equally as intriguing as the events that can arise from the secluded Ohioan landscape is that Howells managed to elevate the western landscape and its people in the minds of his eastern readership. At the end of the novel, T. J. Mandeville, a traveler from Cambridge, Massachusetts, comes to Salesville to hear “whether there were many of the Little Flock [Dylks’ followers] left” (Howells 98). Mandeville’s character—the educated man from Cambridge, Massachusetts—serves as a stand-in for Howells. The reader is invited to read the text as Mandeville’s retelling of the events. Mandeville’s interest in the events of the Leatherwood God and Howells’ use of his position as a well-known man of the east both grant the west importance and relevance in the elite urban literary circles. The North American Review credits The Leatherwood God: “The irony of the story is masterly; it somehow exalts rather than belittles human nature, while it shows how near the heart the greatest folly really lies” (2). The Leatherwood God does not make a spectacle out of Salesville, Ohio for the eastern educated reader—readers are invited to empathize and understand rather than treat Salesville as a backwater spectacle.

In writing The Leatherwood God, William Dean Howells not only brings Ohio to Cambridge but effectively makes a return to Ohio through writing the text. Howells published The Leatherwood God in 1916—just four years before his death in 1920 and the same year he published his autobiography Years of My Youth. Though he never returned to Ohio following his father’s death in 1894, the focus of his literary pursuits on the place of his youth perhaps suggests a desire to return intellectually, spiritually, to the state he could not for fear of pain return to in person.

The Leatherwood God becomes more resonant when we understand that Americans in 2018 are dealing with our own Dylkes-like figure. President Donald Trump takes up our time and attention. We see his tactics when we see Dylkes promising salvation, a release from the daily grind of poverty and the rigor of eking out a living on the Ohio frontier. We see overlaps between Dylkes and Trump in their showmanship — in their overpromising of impossible outcomes, as Dylkes does with the miracle, and Trump does when he promises to return the country's economic expansion to 3-5 percent a year.

We see the similar levels of devotion in their followers, too. T.J. Mandeville asks Braile if any of the Little Flock (the name of Dylkes' followers) were convinced after he failed to perform the miracle, and Braile suggests "it was only the unbelievers that disbelieved in the miracle." We see Trump going to the same spaces, these vulnerable rural communities. Yet at this moment, there does not seem to be any Squire Braile, the voice of reason and good sense to right the ship, as Braile does in Salesville. 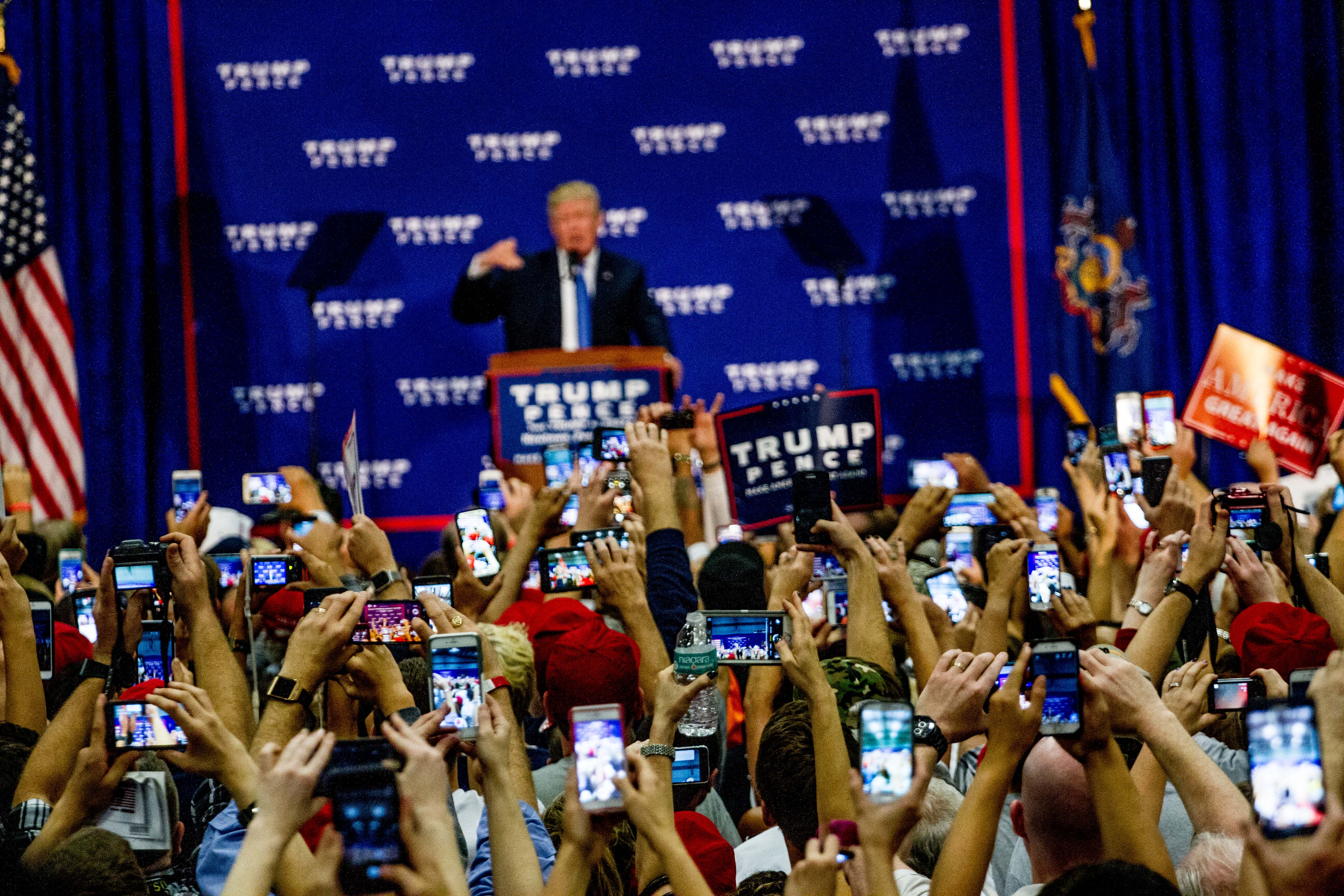 We can imagine the counter-protesters in front of a Trump rally, mocking in the same way as the Dylkes-doubters do: “Make the Devil jump, Joseph! Make him rattle his scales for us!” “Fetch on your miracle!” And we can also imagine the staunch divide in this country between fervent Trump supporters and #Resisters, after Dylkes fails to perform his promised miracle, and Howells tells us that it “left the question of his divinity where it had been,” effectively convincing neither side to come together to grapple with the questions this intrusion on their community raises.

Helen and Wilson Follett wrote that Howells understood where the United States was at the turn of the century, when the country was at the intersection of so many new challenges and conversations. With all of this context in mind, it becomes clear that The Leatherwood God is more than a century-old novel by a respected novelist. It is an expression of self by William Dean Howells and the wider conflicts he faced as a writer and the veteran of a literary war that helped shape American writing forever. This novel is more than a story, it is a testament to the tempers and conflicts of a premier artist, critic, and man between worlds.